Warning this video may upset/offend 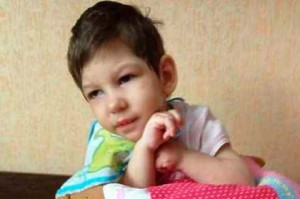 Family members of Moscow’s ‘killer nanny’ said she ‘kept her schizophrenia a secret’ and ‘were shocked but not surprised’ that she took part in such a gruesome act.

In scenes that rocked the world on Monday, a black-clad woman was filmed walking the street holding on to a four-year-old girl’s severed head, threatening to “blow everyone up”.

Witnesses say Gyulchekhra Bobokulova, 38, was shouting “Allahu Akbar”, while pacing up and down outside a Moscow metro station in front of bewildered bystanders.

The mother-of-three was later detained by police for killing Nastya Meshcheryakova, who reportedly had learning disabilities.

The family of Bobokulova were interrogated by police the next day claiming she had been registered at a psychiatric clinic in Uzbekistan and tried kept her schizophrenia a secret, Daily Mail reports.

A police source in the ex-Soviet republic told the publication the parents of Bobokulova and her husband said they were “shocked with the cruel murder” but they “were not surprised” she did it.

“Everybody here knew Gyulchekhra. She was a strange woman, to put it mildly,” he said.

“Strange things often happened to her in spring time. Her parents watched her and tried to send her to the psychiatric clinic when spring came.”

The source also said she was officially registered as insane in 2000 and “her condition was gradually deteriorating”.

It is believed Gyulchekhra had schizophrenia for 15 years and tried to keep it a secret by never taking medical documents with her when applying for jobs.

The killer nanny then moved to Moscow where got the job as a nanny and only visited her three children, aged in their late teens and early 20s, during holidays.

When police interrogated the ‘killer nanny’ she told them she was “haunted by voices” before she decided to execute the child who had learning difficulties, LifeNews reports.

She also said her husband of 12 years “drove her mad” after he left her to be with another family.

The deranged woman also claims she was “kicked on to the streets and ” left to work around the clock”.

Only 16 hours after the shocking killing, the police source said she confessed to the crime and took police to the scene of the crime where she was reportedly cooperating.

In footage released by local media, Bobokulova can be seen in handcuffs as police escort her toward the burnt-out apartment.

She points to the entrance and block of apartments and took police up to the fifth-floor where she lived with the young girl’s family.

“I came here and took off my skirt, threw it in a rubbish bin. Got changed into what we wear to have prayer. A voice told me to wear so,” a police source claimed she said.

It was here she allegedly strangled the girl and severed her head off with a kitchen knife.

After the gruesome act, it is believed she left the child’s body in a cot and took only her head out on to the street before setting fire to the apartment and fleeing onto the street where she was later arrested.

Media reports said the nanny had looked after the girl like she was her own.

“I hate democracy. I am a terrorist. I want you dead,” Bobokulova shouted as she waved the head, according to footage broadcast by local television.

“You have become so hardened, you have eliminated so many of us. Look I am a suicide bomber, I will die, doomsday will come in a second,” she said in accented Russian.

Witness Alyona Kuratova told independent Dozhd TV that the woman was holding the head by its hair.

Kuratova described scenes of chaos, with police cars and ambulances arriving at the scene and some people yelling: “terror attack, terror attack.”

Another witness said the woman shouted that she would “kill everyone, blow up everyone.”

Some said the woman had paced up and down for some 20 minutes before she was detained near Oktyabrskoe Pole metro station.

“According to preliminary information, the child’s nanny… waited until the parents left the apartment with their elder child and, guided by unknown motives, killed the little one, set the apartment on fire and left the scene,” the Investigative Committee said.

Russians have in recent years seen all kinds of gruesome murders and attacks including the bombing of planes and the metro.

But the little girl’s murder sent shockwaves across Moscow, with many saying the woman had not been apprehended quickly enough and questioning the professionalism of police.